The journey so far of my interest, research, learnings and experience of Arts Therapy in schools…

In 2011 after completing a BA, majoring in Psychology from the University of Canterbury, I began a 3 year Master of Arts – Arts Therapy program at Whitecliffe College of Arts & Design in Auckland.

In 2012 I completed my Masters dissertation, a research project at an Auckland intermediate school (10-12 years) that explored how psycho-education could be delivered to young people through an Arts Therapy framework.

In 2014, as part of my clinical year of study, I was mentored by Anna-Michele Hantler (an UK trained Arts Psychotherapist) as we went into a low-decile Auckland school to work with classes, groups, and individual children.

During the same period I worked as a research assistant for a Mindfulness in schools project being piloted by the Mental Health Foundation and AUT. As well as gathering and inputting data, I also sat in on sessions led by Grant Rix, and even led a movement based mindfulness exercise for the children.

I was lucky enough to receive a scholarship from AMP that set me off on a journey to the United States to study and learn from Arts Therapists working in the field of youth mental health. 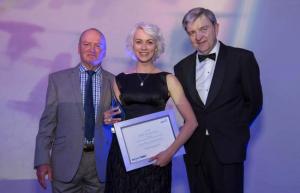 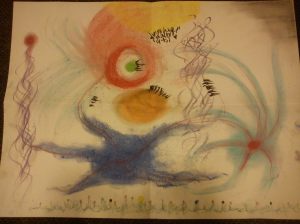 Through the brilliance of Skype I was able to join my fellow students back in New Zealand for our final 4 day Arts Therapy Clinical seminar. 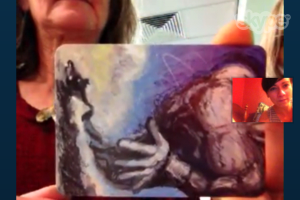 In September I moved to Chicago. While there I attended a lecture by an Art Therapist whom I had come across during my Masters research – Barbara Fish, a practitioner who had worked for over 25 years with children and adolescents affected by trauma in hospital, residential and school settings.

In Chicago I began my internship at 2 schools with Art Therapy Connection (ATC) under the supervision and leadership of Haley Rittenhouse. ATC is a non-profit organization that provides in-school and after-school art therapy and expressive arts programming for at-risk youth who have little or no access to support. Since its inception in 2002 ATC has partnered with 10 schools to serve over 2,300 students in Chicago’s disadvantaged neighborhoods. One thing that really excited me was their systems and processes which had been developed over a number of years into a smoothly running organization. Having had a small taste of working therapeutically in New Zealand schools I was aware of the huge amount of organizational and support work that was required to make therapy in schools possible.

I continued to expose myself to art and creativity, as well as make art for myself. 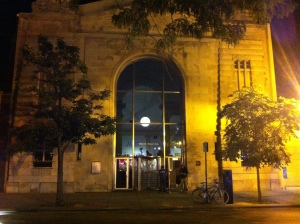 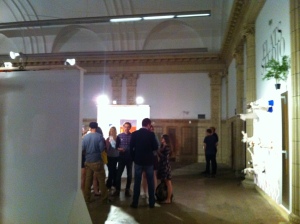 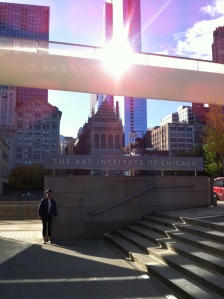 In November I was lucky enough to attend the 49th Annual Conference of the American Dance Therapy Association in Chicago, where I attended workshops from some of the leaders in the field, including Rena Kornblum whose therapy techniques I have studied and utilised in my own work. Kornblum uses dance movement therapy to help children understand, self-regulate and diffuse their anger.

It was inspiring to see my DMT mentor Anaia Treefoot representing New Zealand on the International Panel of the conference, and to reconnect with other Arts Therapy colleagues from back home. 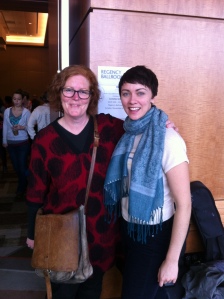 Later that month I was offered the chance to sit in on a dance movement therapy class with students from Columbia College in Chicago. It was intriguing to see the similarities and differences between DMT training here and in New Zealand. I connected with some of the students and took part in class experientials… 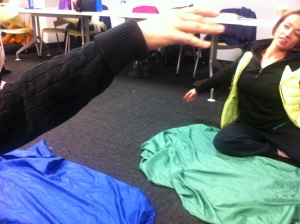 With my internship over, I moved onto the UK. After being reunited with my sister in Cornwall, we packed up and moved to Bristol in February 2015 where I began working as an Arts Therapist with Kids Company. Similar to Chicago, I was stationed at a school doing one-on-one sessions with vulnerable teenagers. Kids Company has a remarkable and inspiring ethos and I was overjoyed to be involved. (http://www.kidsco.org.uk/bristol). This is what New Zealand needs! A Kids Company service!! 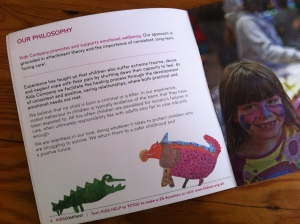 During the summer holidays trajedy struck… After major funding cuts and government controversy Kids Company closed it’s doors right across the board. This long running organization supporting 6,000 of the most vulnerable young people in London, Liverpool and Bristol was to cease all services. My position with them was terminated and I could no longer continue my art therapy work in the secondary school. Sadly the school took no interest in further supporting the students I had been working with by employing me as an indepedent contracter.

It was disheartening to say the least. But there are still amazing individuals, groups and organizations working tirelessly in the UK to support young people in need. In September I was lucky enough to meet Sophia Giblin, the founder of Clear Sky Children’s Foundation (http://www.clear-sky.org.uk/). They aim to develop emotional wellbeing for children and young people through the use of Play Therapy, training and parenting courses. My mentor Anna-Michele Hantler and I were delighted and inspired by the Clear Sky therapy buses which had been used in the early days of the organization to deliver therapy services to schools around Oxford. Sophia spoke with us for several hours about how the organization runs and is willing to offer support and guidance in the future if we were to set up something similar in New Zealand. 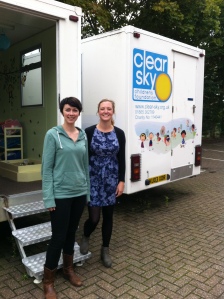 The following day I travelled up to London to attend the training workshop on Anti-Bullying work with children run by Anna-Michele Hantler. The training took place at the Centre for Child Mental Health (www.childmentalhealthcentre.org) at The Institute for Arts in Therapy & Education… an Arts Therapist’s paradise!! The training was fantastic and I came away with a much greater understanding of bullying and how to manage it effectively through creative approaches. 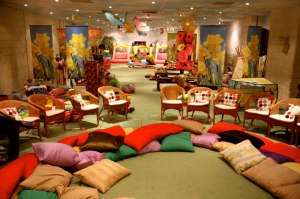